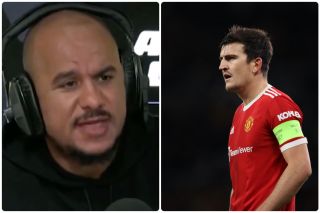 Gabriel Agbonlahor has ripped into Harry Maguire after his latest performance for Manchester United as they came back to beat Atalanta 3-2 in the Champions League on Wednesday night.

It wasn’t the most convincing display you will see from a United side, but the Reds turned it around with a stunning second half display to cancel a two goal deficit and take all three points.

Speaking to talkSPORT this morning, former Premier League striker Agbonlahor made it clear he wasn’t impressed by the way Maguire played, describing him as looking “lost” against the Serie A side.

🏟 “The #MUFC fans thought that they’d come back. They’ve done it all season!”

😤 “Man United should be smashing Atalanta, not coming back to win 3-2!”

Still not enough to satisfy Agbonlahor, who doesn’t know anything about playing in the Champions League.