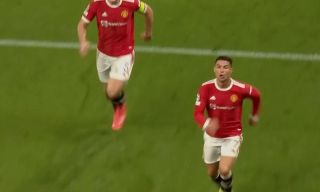 Cristiano Ronaldo’s sixth goal since his return to Manchester United.

Right when Ole Gunnar Solskjaer needed his players most, they have completed a stunning comeback after going in at half-time trailing 2-0.

But now the Reds lead 3-2 and a much improved second-half, with Ronaldo finishing off the comeback. It’s down to his teammates to concentrate in order to see the game out — something we were unable to do at the weekend against Leicester City.

Ronaldo got up strong to win the cross in the air before heading home.

He always has to have his say, and he's come up with another big goal for Man Utd in the Champions League!

Footage above courtesy of BT Sport and beIN Sports.

He hasn’t done much in the game, although there has been parts where he’s busted a gut to track back and press the ball in Atalanta’s half.

United deserve to be in the lead with less than 10 minutes left on the clock.