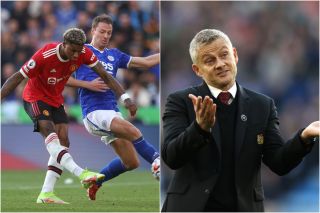 Marcus Rashford is set to make his first start of the season after recovering from a shoulder injury. The 23-year-old pressed ahead with plans to go under the knife earlier this year and missed all of United’s games prior to last weekend’s defeat at Leicester.

Rashford marked his return to action with a goal and will be hoping to build on that tonight against Atalanta. The tricky winger remains one of Solskjaer’s most important players and his back-to-back 20-goal hauls in all competitions are needed more than ever.

Solskjaer has now explained his decision to start Rashford, despite the forward only just recovering from the injury which was initially sustained in 2020.

“I think we just need to cover a lot of ground against Atalanta,” Solskjaer is quoted as saying by the official Manchester United website.

“They’re a very aggressive, high-intensity team but also we want to have forwards trying to exploit the space they create as they can give away space behind them.

“There were many different ways we can set up today but we decided to start with Marcus as well.”

Read more: Solskjaer may have already decided his team for Liverpool with line-up against Atalanta – opinion

Rashford’s threatening diagonal runs have become his trademark move in recent years, with the goal against Leicester coming from that penetrative run.

After winning and losing in their opening two Champions League games this season, victory over the Italian outfit would see United take a huge step towards qualification to the next round.