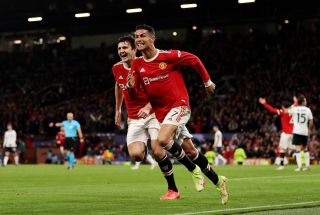 Cristiano Ronaldo has extended his crazy run of producing memorable moments as he nodded in Manchester United’s winner against Atalanta in a sensational comeback win at Old Trafford.

Gian Piero Gasperini’s fearless side took a surprise two-goal lead against a turgid United side but following the interval, there was a strong reaction from Ole Gunnar Solskjaer’s side.

Similarly to the winner against Villarreal last month, it was once again Ronaldo who would steal the limelight. The 36-year-old scored his sixth goal in his second coming with a beautiful header to steal all three points.

The former Real Madrid and Juventus forward has reacted to his match-winning contribution on social media, insisting that “we are alive” following a run of poor performances and added scrutiny.

“Yes!” Ronaldo wrote on Instagram. “The Theater of Dreams is on fire! We are alive! We are Man United and we never give up! This is Old Trafford.”

Solskjaer will be hoping for similar returns from his star forward on Sunday as United welcome Liverpool to Old Trafford in a mouthwatering fixture.