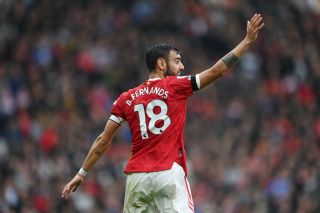 Manchester United midfielder Bruno Fernandes was reportedly ready to quit the club over the involvement in the failed European Super League plans.

The Glazers were one of the frontrunners behind it, and it seems the club’s role in trying to form this new breakaway competition went down badly with not just supporters, but some of the players.

Fernandes won’t be happy to see the latest Super League plans because the project has not gone anyway as it sounds like they’re planning an updated version of the competition to appeal to the masses.

According to The Athletic, Fernandes was strongly against the idea of there being no relegation involved as part of the competition, which has seemingly been addressed with the new plans.

It is noted that Fernandes felt so strongly against the ESL that he was ready to try force a move away from Manchester United as a result.

The report also notes how Luke Shaw was another United player who was strongly against the breakaway league, and he made it clear it Ed Woodward that the plans were not welcome in the dressing room.

What a huge blow losing Fernandes would be!