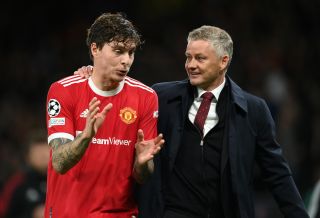 Manchester United are backing the manager – and so are the players.

It was a backs against the wall job at half-time with Manchester United losing 2-0.

The Reds had seven very good chances which they didn’t take and defended abysmally.

However, it was not for a lack of effort, and I don’t think anyone could say the players have thrown in the towel on Ole Gunnar Solskjaer.

The Norwegian needed a win tonight – make no mistake about that because getting knocked out of the Champions League before the next round would be a huge blow.

Credit to the players for pushing off the ropes and fighting on after the break.

They created enough chances to win two matches and finally got over the line thanks to Marcus Rashford, Harry Maguire and Cristiano Ronaldo.

Respected journalist Fabrizio Romano tweeted at the full-time whistle and explained why United have decided to continue backing Solskjaer. He wrote: “Man Utd board thinks players are ‘with the manager’.”

Manchester United reaction in the second half shows why the board decided to give Ole Gunnar Solskjær some time, after poor performances. First half was terrible – but Man Utd want to protect Ole. Now, Liverpool. 🔴 #MUFC

Man Utd board thinks players are ‘with the manager’. pic.twitter.com/Fy1d4Ra77e

The fans are also with the manager. You heard them sing his name before, during and after the match tonight.

One response to “Fabrizio Romano: Man Utd players are ‘with’ Ole Gunnar Solskjaer”