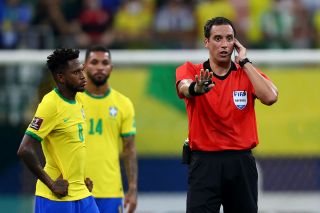 Former Barcelona right-back Dani Alves has hit out at Ole Gunnar Solskjaer after comparing how Fred plays for Brazil and Manchester United.

Alves says Fred is not the problem at United, seemingly reacting to the criticism the player receives across social media, instead putting the blame on ‘Solskjaer or the club.’

It would be fair to say United fans have been critical of the Brazil international’s performances, particularly when played in a double pivot with Scott McTominay.

United don’t boss games in the middle and often get overrun by lesser teams.

As a result, the team lacks consistency and we are already dropping points in winnable games this season.

“I hear so many people complaining about Fred. But when he plays for Brazil he is better than all of their midfielders.

“The problem is the club or coach, not Fred.”

My biggest problem with this, is knowing Fred’s qualities I only see him as a squad player.

One we get our midfield sorted I don’t see him starting every week. Period.

International football is very different and while I agree he gets the scapegoat treatment a lot of the time, Alves is going over the top labelling every Brazil international “world class”…