The 1894–95 season was Newton Heath’s third season in the Football League and their first outside the top flight. They finished third in the Second Division, earning the right to play in a Test match against Stoke City in order to regain their top-flight status. They lost the match, which was played at Vale Park, Burslem, 3–0 and remained in the Second Division. In the FA Cup, the Heathens were knocked out in the First Round after losing 3–2 to Stoke City.

The club also entered teams in the Lancashire and Manchester Senior Cups in 1894–95, but were knocked out in the first round of both competitions. As in the previous season, a Newton Heath team also competed in the Lancashire Palatine League, along with Bury and Liverpool. They beat Liverpool at home, but drew at Anfield and lost both matches against Bury. It was to be Newton Heath’s last entry in the Palatine League. 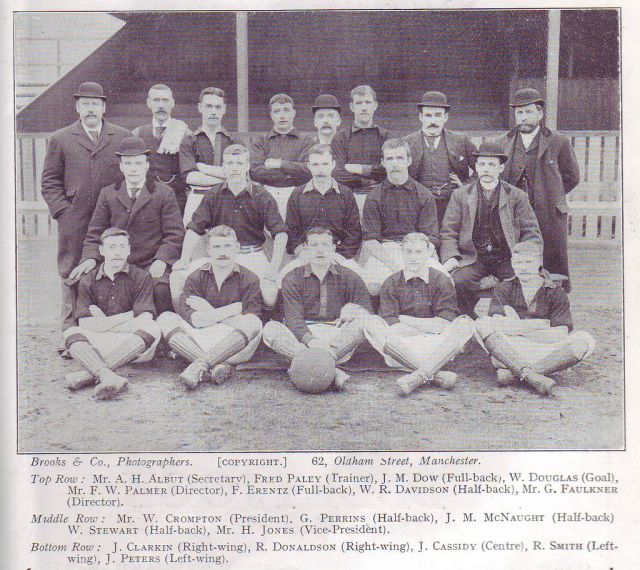 A Change of Home Ground

Newton Heath moved from the North Road ground in 1893 to Bank Street (or lane). Located on Bank Street in the Manchester suburb of Clayton, opposite the junction with Ravensbury Street and between the railway line and the Albion Chemical works, the ground was locally known as the Bradford and Clayton athletic ground and owned by the Bradford and Clayton Athletic Company. After Newton Heath F.C. were evicted from their old ground at North Road by the Manchester Deans and Canons, who believed it to be inappropriate for the club to charge an entry fee to the ground, secretary A. H. Albut ( pictured above ) procured the use of the Bank Street ground in June 1893.

The site was let to the club for eight months of the year, with pre-season training permitted on occasional nights in the summer. The ground was without stands, but, by the start of the 1893–94 season, two stands had been built; one spanning the full length of the pitch on one side and the other behind the goal at the “Bradford end”. At the opposite end, the “Clayton end”, the ground had been “built up, thousands thus being provided for”.

Newton Heath’s first Football League match at Bank Street was played against Burnley on 1 September 1893, when 10,000 people saw Alf Farman score a hat-trick, Newton Heath’s only goals in a 3–2 win. The remaining stands were completed for the following league game against Nottingham Forest three weeks later. However, Newton Heath did not fare well in their first season at the new ground and were unable to retain their First Division status at the end of the season, finishing bottom of the 16-team division. At the time, the condition of the Bank Street pitch was well documented. On one occasion during the 1894–95 season, Walsall Town Swifts turned up at the ground and were greeted by what they regarded as a “toxic waste dump”.

After lodging an official complaint about the pitch to the referee, they were finally persuaded to take to the field, only to be beaten 14–0 (unofficially, the biggest win in the history of Manchester United). However, the Football League ruled in favour of Walsall and the match was ordered to be replayed, though the result was not much better for the visitors the second time round, this time losing 9–0.

The season was a little more successful than the previous, but although they spent much of the year in second place they did not gain promotion, because by the end of the year they stood in third position in division two. In October 1895, before the visit of Manchester City to Bank Street, the club purchased a 2,000-capacity stand from Broughton Rangers Rugby League Club, and put up another stand on the “reserved side” (as distinct from the “popular side”). However, weather restricted the attendance for the Manchester City match to just 12,000. Improvements to the ground were restricted by the running track that encompassed the pitch, which, by the request of the Bradford and Clayton Athletic Company, could not be removed. However, the ground came into the possession of the club’s ex-president, Mr. W. Crompton, in 1898, allowing them to make whatever improvements to it they desired. One report in the Manchester Courier predicted the addition of a 25-foot (7.6 m) tall stand on the side adjacent to Bank Street itself, with a refreshment stand underneath, while the opposite stand would be moved back 6 yards (5.5 m) and raised up on brickwork by around 16 feet (4.9 m), with the space underneath to be used as changing rooms for the players and referee and various rooms for the club committee.

These improvements would cost a lot of money, however, and this, in combination with the players’ ever-increasing wages, sent the club into a period of financial turmoil. The club was presented with a winding up order in January 1902, and Bank Street was on the brink of being repossessed until they were saved at the eleventh hour by a wealthy local brewer, John Henry Davies. He and four other men, among them club captain Harry Stafford, invested a total of £2,000 in the club, now renamed Manchester United F.C., and Davies himself paid £500 for the erection of a new 1,000-seat stand at Bank Street. Within four years, the stadium had cover on all four sides, as well as the ability to hold approximately 50,000 spectators, some of whom could watch from the viewing gallery atop the Main Stand. The stadium was even deemed worthy enough to host a match between Football League and Scottish Football League representative sides in April 1904, hosting 25,000 spectators as the Football League side won 2–1.

Around the turn of the 20th century, Newton Heath pulled off a significant coup by persuading the Manchester Evening News to set up an office at Bank Street. In response to Manchester City’s relationship with the Manchester Evening Chronicle, the Heathens’ believed that their partnership with the Evening News would cultivate interest in the club, while the newspaper would benefit from increased coverage of football.

The site had various industrial uses for the next 80 years, until it was cleared for inclusion in the new Manchester Velodrome in the early 1990s. The actual site occupied by the stadium now serves as the Velodrome car park 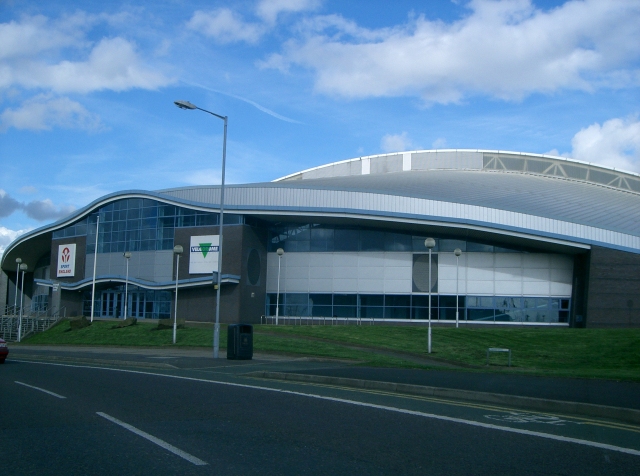 The car park for the Manchester Velodrome is located on the site where Bank Street used to be. 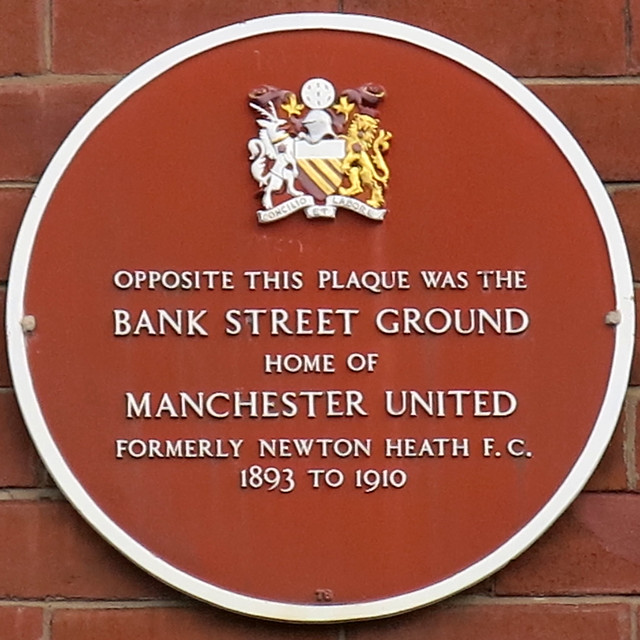 … while a red plaque attached to a house opposite marks the site as part of United’s history.