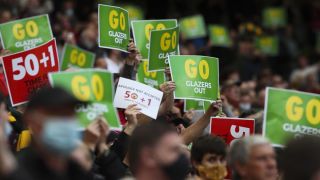 Manchester United have confirmed that Kevin and Edward Glazer have sold 9.5m shares in the club this month.

The club’s latest filling to the Securities and Exchange Commission in the US reveals that Kevin Glazer has sold 5 million and Edward Glazer has offered 4.5 million to BofA Securities.

United will see none of this money, as many as you would expect, as the Glazers continue to drain what they see as their cash cow.

The filing in question reads: “On October 5, 2021, the Kevin Glazer Irrevocable Exempt Family Trust and the Edward S. Glazer Irrevocable Exempt Trust (together, the “Selling Shareholders”) agreed to sell 5,000,000 and 4,500,000 Class A ordinary shares, respectively, at a price of $16.98 per share (the “Offering”) to BofA Securities, Inc. (the “Underwriter”) pursuant to the terms and conditions of the underwriting agreement (the “Underwriting Agreement”) entered into between the Issuer, the Selling Shareholders and the Underwriter.

On October 5, the shares had been put up for sale on the New York Stock Exchange.

As far as the Glazer’s total combined ownership of the club, it is understood that the American family own 69 per cent of Manchester United.