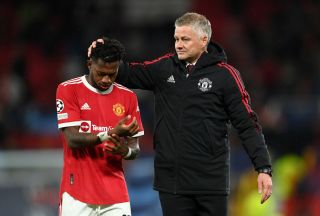 Every man and his dog is aware of Manchester United’s problems in midfield.

To put it into some perspective, United have won five of their 11 games this season and their midfield imbalance leads to exposure most weeks in the Premier League.

The Manchester Evening News now claims Ole Gunnar Solskjaer is unhappy the club failed to sign a midfielder in the transfer window as he continues to struggle to find the right system to get the most out of his players.

Apparently, a combination of factors prevented United from bolstering the midfield — and the manager is reportedly unhappy about the failure to address a pretty big problem.

United have lost two of their last three Premier League matches, keeping one clean sheet in their last 19, and Liverpool come to Old Trafford this weekend.

The report claims sources say the unlikelihood of a midfield signing did not stop United from wanting to buy one and there was an agreement within the club structure that a winger and a centre-back should be prioritised.

United were linked to a number of midfielders in the summer, too: Eduardo Camavinga, Declan Rice and Leon Goretzka.