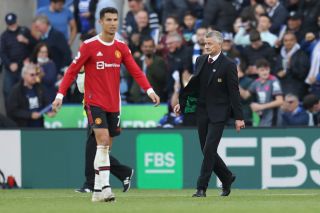 Italian journalist Fabrizio Romano has outlined what could happen in the coming weeks unless results improve for Manchester United.

Talk of sacking the manager has increased over the past week. It intensified after United’s most recent loss — an embarrassing 4-2 thumping away to Leicester City — but we would love nothing more than to see Ole Gunnar Solskjaer turn things around.

Unless results pick up, though, the Norwegian will lose his job as manager.

While speaking on his own YouTube channel, Romano said that the hierarchy are ‘backing’ Solskjaer, just like The Athletic ran in an exclusive story.

He explained that the ‘situation could change’ in the near future if the manager can’t turn things around. United take on Atalanta on Wednesday night and Liverpool on Sunday, before league games against Man City and Tottenham Hotspur.

Romano said: “They are backing the manager. They want Solskjaer to change the situation, but if the situation will collapse and Man United will keep going not at [the] top-level, maybe the situation could change.

“So as of now, they are protecting the manager, they are with him. And the message — I want to be so clear — from Man United is, ‘Solskjaer is out manager, we are with him’.

“But of course, we know that in football things can change, and if Manchester United are not changing their results, maybe the situation could change in a few months.”

The pressure is on but two wins this week would help lift the mood.