The 28-year-old tends to divide opinion among United fans since arriving from Shakhtar Donetsk in 2018.

Fred was a disappointment during his debut campaign at Old Trafford but gradually began to find himself grow into the team, winning over a number of United fans over the next two seasons with his sheer energy and tenacity.

The Brazilian is currently in his fourth season, though, there are many fans who would prefer to see him replacement immediately in the team with a new midfield signing.

Also many feel Fred isn’t good enough to warrant a place in the first-team every week, but that doesn’t stop him starting (in a different role) for Brazil.

His assist during Brazil’s 4-1 win over Uruguay might explain why Ole Gunnar Solskjaer continues to keep faith in the South American, who is likely to miss this weekend’s match due to the time it would take to get him back in Manchester.

In the 10th minute of the match, Fred received the ball 30 yards from goal before floating an inch-perfect pass in behind the Uruguay defence to find Neymar lurking inside the box.

Neymar strikes first to give Brazil the lead against Uruguay! 🇧🇷

A delicious assist by Fred 🔥 pic.twitter.com/71Ho1TUteZ

Let’s hope he can start finding Cristiano Ronaldo with similar passes into the box. 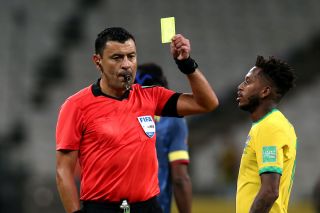