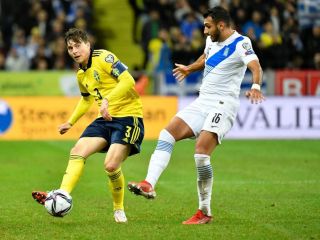 Victor Lindelof was back on international duty last night.

The Swede missed his country’s match at the weekend as he stayed behind in Manchester for the birth of his child.

Lindelof was back in action for his country last night as captain, leaving everyone connected with United nervous over whether he would come through 90 minutes unscathed.

Fortunately, like Eric Bailly who represents the Ivory Coast, he came through the game without any difficulties and will be fit to face Leicester City this weekend.

Ole Gunnar Solskjaer is already without Raphael Varane and skipper Harry Maguire for the match, so he will need to call upon other players to stand up to the mark in their absence, especially if they are missing again for Liverpool’s trip to Old Trafford the following week.

Lindelof had an easy night against Greece, claiming a 2-0 win thanks to goals from Emil Forsberg and Alexander Isak. The United defender didn’t make a single tackle or interception but he made sure of three battles in the air that needed to be won.

Let us know in the comments section if you are confident about Lindelof starting this weekend.