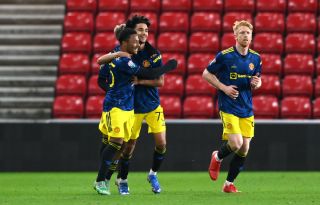 Manchester United U21s played their third match of the EFL Trophy group stages tonight in the quest to make it in the knockout stages.

It was almost the perfect start for United as Joe Hugill got the ball and did well enough to go around the keeper but only hits the post from a tight angle. Charlie McNeill then could have had a brilliant chance to score on the rebound, however he slips and so does the United chance to get ahead.

The game was being played at both ends as Mee made a great save early on. Sunderland started the game better given United’s weak links in midfield as they were holding into it well. United then force a save on former academy player Carney through Charlie McNeill. Then minutes earlier it was Sunderland’s time to hit the post through a free kick.

Clearly this was not the brightest start as Sunderland continued to dominate the game and minutes later Mee gave away a poor clearance but managed to save the shot following his mistake. Dillon Hoogewerf, who had seemed lively, sent his shot was just over the bar. As half time approached Fernandez tried his luck with a shot forward and what followed was a Hoogewerf low shot which was blocked, Iqbal tried his luck in the rebound. In the end, it was McNeill with another effort. United’s final chance of the half was from Bjorn Hardley and strangely enough the score was still 0-0.

The second half did not start well enough for United as the players seemed a bit clueless over their positioning in the pitch and sooner it seemed that we would concede. So it happened as a Hugill back pass found a Sunderland player who then forced a shot on Mee however the keeper’s reflection was not good enough to keep the ball out of Dyce’s sight who made no mistake. A loss here would mean that United would end their campaign here so they had to react quickly. McNeill at first had his shot blocked with United getting a corner. The players decided to play a short corner and Savage with the ball found Iqbal at the top box. Zidane then cut inside and fired the ball at the top left corner. Brilliant goal to get an equalizer.

Things were going United’s way after the goal, but Sunderland were smart enough to find an unmarked area retaining their lead in the space of ten minutes from United’s equalizer. It is quite difficult to understand what the young Reds were doing there but it was of major importance to get the way through the goal again. Meanwhile, Mani Norkett made his U21’s debut as he replaced Joe Hugill while Omari Forson came in for Dillon Hoogewerf.

Time was ticking and the U21s had little time to react. Another substitute did nothing to United’s chances and they waved goodbye to the tournament. A young side that did well overall but were unable to finish their chances.