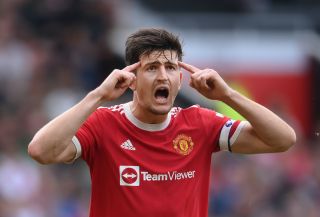 Manchester United captain Harry Maguire has provided a positive update on the calf injury he sustained against Aston Villa in September which caused him to miss the recent international break with England.

Since signing for United, Maguire has been virtually ever-present for the Reds (114 appearances for the club thus far), but he’s recently found himself out of action. Along with the news Raphael Varane will be out for a few weeks, this doesn’t bode well for Ole Gunnar Solskjaer, who has a number of tricky fixtures coming up.

The towering centre-back picked up a calf injury against Villa at Old Trafford last month and is set to miss this weekend’s clash away to Leicester City in the Premier League.

Maguire has been working hard on his rehabilitation at Carrington during the international break. The skipper has given a positive update on his injury in a recent interview with club media (via ManUtd.com).

“Yeah it’s getting there,” Maguire said on his recovery. “I still haven’t trained yet with the squad, but I am getting better, I am progressing as I should be. It is obviously a frustrating injury for me to get, but I am progressing and I will be back on the pitch soon.”

His 115th match for the club can’t be far away.