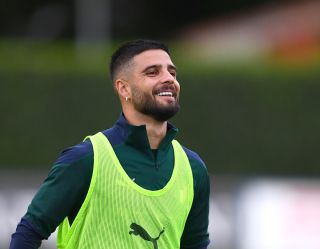 The next transfer window is edging ever closer and despite spending big sums on Jadon Sancho, Raphael Varane and Cristiano Ronaldo over the summer, Manchester United are continuously being linked with big-name players across Europe.

Napoli and Italy star Lorenzo Insigne has less than one year remaining on his contract at the Italian clubs and is being offered to various clubs in Europe, with Manchester United being cited as a possible destination for the legendary figure in Naples.

Three brief loan spells aside, Insigne has spent his entire professional career with Napoli and is adored by the crowd at the Diego Maradona Stadium.

According to La Gazzetta dello Sport, via the Manchester Evening News, the 30-year-old will not extend his current contract with Napoli and is now ‘tempted’ by a move to Manchester United.

There is, however, no indication that the Old Trafford club is interested in following through on Insigne’s interest. Ole Gunnar Solskjaer is spoilt for choices in wide areas, with Marcus Rashford, Mason Greenwood, and Jadon Sancho all unlikely to be dropped for a new recruit.