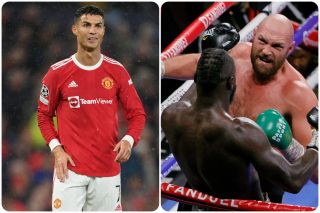 Lifelong Manchester United fan Tyson Fury retained his WBC belt in Las Vegas as he confirmed his place at the very top of heavyweight boxing with an 11th-round stoppage and wants a title fight back home in Manchester.

The boxer has warned Manchester United star Cristiano Ronaldo of his plans to take over Manchester after his knockout blow to Deontay Wilder on Sunday morning to retain his WBC belt.

A memorable fight as Fury was force to get up off the canvas twice as he floored Wilder three times himself. It was certainly worth getting up for at 4am as well as the struggle to get back to the sleep afterwards.

Fury’s Manchester homecoming appears to be on the cards which is really something the city can begin to look forward to. That would be a marvellous occasion and there’s only one place he’d want it hosted, at the Theatre of Dreams.

“I have two fights left out here but I’d love to bring a world title fight back to Manchester,” Fury told the Mirror. “It has always been a dream of mine to fight at Old Trafford.

“The last fight there was Eubank versus Benn in 1993 and that was massive. I’m really happy Ronaldo’s back at Old Trafford — but this town ain’t big enough for the both of us!

“If I lived in Manchester it would be a problem. But I’m an hour up the motorway in Morecambe so he’s got plenty of distance.”