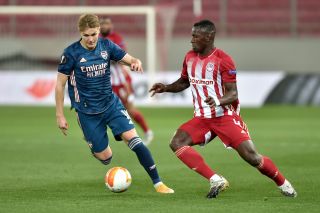 The rumour mill is suggesting Manchester United are plotting a transfer raid on Greek giants Olympiacos.

As the biggest football club in the world, Manchester United usually get linked to the biggest names in the game, or youngsters who many tip to have the calibre to win a Ballon D’Or in the future. Ultimately the club is always looking for the next best thing.

Getting that star is difficult because all of Europe’s best clubs tend to be looking at the same talents. Thankfully our academy has long produced the best players and we can now see that with Mason Greenwood bursting onto the scene.

In the summer we signed Cristiano Ronaldo, Jadon Sancho and Raphael Varane – a haul of quality. However, the team still needs fine tuning and that could see our scouting network working overtime in the coming months.

Mady and Aguibou Camara (the Guinea internationals share the same surname) have become rumoured United targets after their recent performances. Neither player would cost a lot, which makes them low risk, and I think it’s good to see us looking at cheaper alternatives in the market.

It is understood that the Guinea international duo have accumulated suitors with Chelsea, Liverpool and Atletico Madrid too.

Mady is a central midfielder while Aguibou likes to play as a No 10.

We’ll keep an eye on this one…