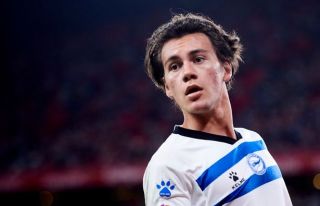 Manchester United’s Facundo Pellistri has detailed his frustration at his lack of game time on loan at Deportivo Alaves this season.

Pellistri, 19, signed for United last season and it was eventually decided that the youngster would head out on loan to Alaves for the second half of the campaign.

He made 12 appearances in La Liga towards the back end of last season and it was announced in the summer that Pellistri would join the Spanish side on loan again. However, he’s managed under 200 minutes on the pitch since the start of the campaign, mostly off the bench.

The Uruguayan has started just one game for Alavas this season, something which he admitted his frustration at.

“I didn’t do pre-season with Alaves, but that’s how it is in football,” Pellistri told The Athletic.

“I have been entering the pitch as a substitute. Results have not been good, but we speak after I came on for 30 minutes against Atletico Madrid, the champions, and a game we won and I did well.

It is believed United are considering recalling Pellistri in January.

That would be for the best if he doesn’t get much game time between now and then.

“It’s difficult and you don’t always play in your natural position. I want to start, to be more powerful mentally and physically. I know I am fast — especially with the ball. I can take the ball quickly up the pitch, I have good control,” he added.

“And I want to improve by playing and go back to Manchester as a better player and get into the first team, but first I need to get used to Europe and be playing regularly. I’m only 19, but regular playing time is important.”