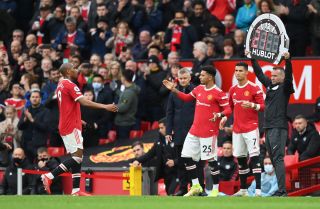 The Portuguese international has quickly established himself as one of the first names on the team-sheet at Old Trafford following his shock transfer from Juventus in August.

Ronaldo, 36, has also made an impressive return to England – scoring five goals in his first six appearances for Solskjaer’s men this season. He won’t complain about that but it’s a different story when it comes to actual results, which for the Norwegian’s case, must improve.

He came on as a second half substitute against Everton but was unable to clinch three points for the Red Devils.

Former United midfielder Blind feels that Solskjaer needs to urgently rethink his tactics to accommodate for Ronaldo and bring the best out of his players.

Speaking to The Mirror, Blind said: “You are not going to change Cristiano any more in his thinking and his approach of the game.

“So Solskjaer will have to come up with a playing style of his team where Cristiano can still flourish and the team can still put their opponent under pressure.

“Cristiano has come back and scored some important goals. But his presence in the team requires a different way of thinking tactically.

“Normally, you would expect that the striker is the first man to chase the defenders of the opposition. He will run from one defender to the other.

“But the team has lost its orientation. They are not in their confident structure now Ronaldo is up front.”