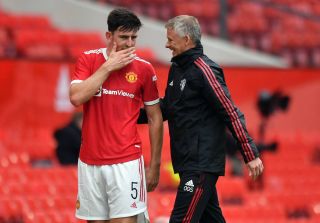 Manchester United are in talks to extend Harry Maguire’s contract at the club as he has entered the third year of his contract, according to reports.

The 28-year-old is a mainstay in Ole Gunnar Solskjaer’s side and plays whenever he’s unavailable. Prior to last season’s ankle injury in May, Maguire had played every single minute of Premier League football since he signed in the summer of 2019.

Maguire has been United’s reliable defender for the best part of two seasons and is now set to be rewarded with fresh terms at the club. That’s according to The Mirror, who claim that a potential new deal would see him join the top earners at Manchester United.

Despite signing a six-year deal in 2019, the United captain is set to be rewarded for his fine form and have his terms improved.

In addition to Maguire, the club is also said to be keen on extending the contracts of midfield duo Paul Pogba and Bruno Fernandes. Pogba, the more urgent case, has less than one year left on his contract at the club.