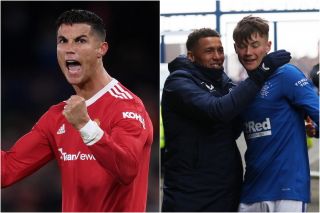 Cristiano Ronaldo’s return to Manchester United has been well-documented across the world and perhaps his second coming at Old Trafford could even attract new players to the club.

At least that’s what former Celtic striker Frank McAvennie thinks, who has warned Rangers that a move to Manchester United would be too hard to turn down for young prospect Nathan Patterson.

Patterson, 19, is highly rated by the Scottish club and has been linked with a move to Ole Gunnar Solskjaer’s side recently. According to 90min, the young right-back is on Manchester United’s shortlist for the next transfer window.

“There is absolutely no chance of Rangers keeping him if Man Utd come in,” McAvennie told Football Insider on the prospect of Patterson potentially leaving the club.

“We can talk about him going anywhere. No disrespect to Rangers but he will not hang around. If that report is right and Man Utd are seriously looking at Patterson, talk about your head being turned.

“There is no one bigger. He won’t start there but he’s so highly rated. Rangers can’t keep him, no way. Maybe Rangers could sell him and loan him back. His opportunities will be limited with Tavernier there.

“But they will also be limited at Old Trafford. The thought of playing with Ronaldo will be too much for him to turn down.”

Manchester United made their intention to sign a right-back over the summer very clear, with a pursuit of Atletico Madrid full-back Kieran Trippier widely covered across the window.

Aaron Wan-Bissaka is a mainstay in Solskjaer’s side and although Diogo Dalot’s return from AC Milan will offer some cover for the former Crystal Palace man, Dalot often leaves a lot to be wanted on the right flank.