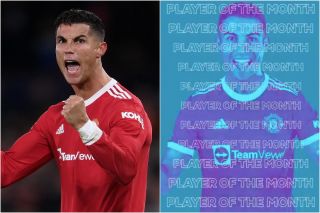 Cristiano Ronaldo has taken the Premier League by storm after returning to the division last month. The 36-year-old completed a sensational return to Manchester United from Juventus on deadline day and has wasted no time in rediscovering the form he showed at Old Trafford 12 years ago.

Ronaldo’s return coincided with the first international break of the season so he was made to wait for two weeks before he could complete his second coming but once it arrived, he scored two goals against Newcastle and followed it up with a goal against West Ham the following week.

Your @EASPORTSFIFA Player of the Month is: @Cristiano 🔴 ⚪️ ⚫️#PLAwards pic.twitter.com/tgkoLkiTuj

Ronaldo’s efforts have now been recognised by the Premier League, who have elected the forward as September’s Premier League ‘Player of the Month’, a monthly award handed to the best performers in the league.

Ronaldo’s three goals in as many games was enough to fend off Mohamed Salah and Ismaila Sarr, who were both nominated for the prize as well.