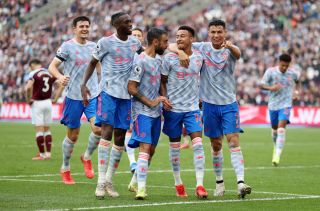 Cristiano Ronaldo’s second coming at Manchester United is one of the most widely-covered stories in modern sports history, with the 36-year-old’s announcement temporarily breaking the official club website just over one month ago.

Ronaldo’s stature brings a different level of scrutiny and to no one’s surprise, even at the age of 36, the former Real Madrid and Juventus forward has started the campaign how he means to go on.

Ronaldo scored two goals on his ‘second debut’ against Newcastle last month, the start of a run that saw him score five goals in his first six games before this week’s international break.

Jesse Lingard, another returning star following his half-season loan spell at West Ham, has started the season in sparkling form and the 28-year-old has now praised Ronaldo for his impact since joining the team, highlighting the leadership he’s brought to the squad.

“He’s been brilliant — he’s brought so much to the team,” Lingard is quoted as saying by the Manchester Evening News.

“He’s one of the best players in the world – to have him back home is perfect for us at the moment. We know that he’ll score goals and win us games.”

The pair have enjoyed a surprising partnership together on the pitch, even though they have only been playing at the same time on a number of occasions. Ole Gunnar Solskjaer will be hoping that partnership evolves further as United embark on their most difficult run of the season over the next two months.