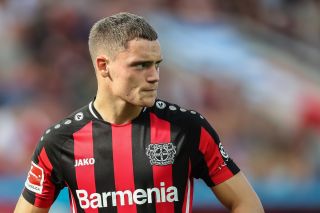 Manchester United made heavy investments in their squad over the summer, with moves for Jadon Sancho, Raphael Varane, and Cristiano Ronaldo all being completed over this year’s transfer window.

The trio was seen as an impressive bit of business from the club, with each player settling in at their own pace. Ronaldo has scored five goals in six games, Varane is slowly integrating into the backline whilst Sancho’s cameo against Everton was his best performance of the season.

Now, there are reports that Manchester United will challenge Manchester City in the race to sign Bayer Leverkusen star Florian Wirtz, who is valued at a whopping €45m by Transfermarkt.

That’s according to SportBild, via Sport Witness, who claims that Pep Guardiola’s side is watching the midfielder ‘regularly’ but will face competition from United for his signature. Furthermore, it’s claimed that all top clubs in England could potentially join the running to sign the highly-rated midfielder.

It is, however, stated that Manchester City are believed to be frontrunners to sign him, with the belief among experts that Wirtz’s sale will bring in €100m due to the demand from Europe’s biggest clubs.

The three-digit sum might be seen as optimistic at this current stage but according to the publication, it’s more realistic in two years.