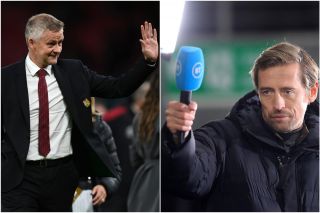 Manchester United lingering in the mid-region of the Premier League table when Ole Gunnar Solskjaer was appointed caretaker manager in December 2018, following a disastrous start to the season under Jose Mourinho.

Immediately, the Norwegian boss started the ‘cultural reset’ we became accustomed to during Solskjaer’s first six months in charge of the club. An impressive run of results earned him the gig full-time and since then, he has finished third (2019/20) and second (2020/21).

Heavy investments have been made this summer, with Jadon Sancho, Raphael Varane, and Cristiano Ronaldo all completing moves to the Theatre of Dreams over the window.

After winning four out of their opening five fixtures, United are now winless in two, both coming at Old Trafford. Former Liverpool and Tottenham striker Peter Crouch has given his two cents on United under Solskjaer and has insisted that they have improved under his stewardship.

Crouch does, however, question United’s ability to challenge for the Premier League title, with last weekend’s drab draw with Everton doing little to prove their title credentials.

“Ole Gunnar Solskjaer has improved this team and the club,” Crouch wrote in his Daily Mail column. “They look as if they are enjoying themselves more. There is that swagger back, they are in the title conversation. They were miles away from that when he took over.

“And they are not exactly adrift of the Premier League leaders. But would there be any major surprise if Solskjaer fails to sustain a title challenge? Everton provided some form of proof. Another home game where United ultimately flattered to deceive and those are the occasions where it seems they will continue to falter.

“The next four league fixtures — Leicester City, Liverpool, Tottenham and Manchester City — are tough but you would not bet against Solskjaer earning results from any of them. And maybe that is the problem. The way they play is perhaps suited to those tests but then will come a draw with Everton, a defeat against Aston Villa. You cannot go to the next level without ironing out the home issues.”