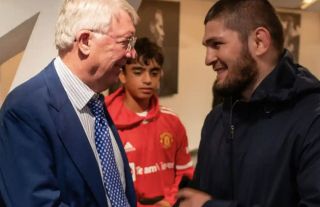 Having been in attendance at Old Trafford last Saturday for Manchester United’s Premier League tie against Everton, legendary former manager Sir Alex Ferguson watched on as his old side limped to a lacklustre 1-1 draw.

Despite an international break coming up next, last weekend’s domestic match saw manager Ole Gunnar Solskjaer name a much-changed side, including Edinson Cavani coming in for star man Cristiano Ronaldo.

The decision to drop Ronaldo to the bench has been heavily scrutinised and despite introducing the megastar with 3o-minutes to go, criticism has increased following the Portugal international’s frustrated reaction at full-time.

One person who strongly disagreed with Solskjaer’s decision not to start Ronaldo is Ferguson, who, while speaking to former UFC lightweight champion Khabib Nurmagomedov in the stadium’s director’s lounge, was spotted assessing the controversial tactic.

“I also think that when they saw Ronaldo wasn’t playing…” says Ferguson (as reported by Guardian).

The Scotsman was then interrupted by Nurmagomedov, who said: “He came on in the second half.”

Ferguson then responded by saying: “I know but you should always start with your best players.”

Ahead of the international break, the Red Devils are not expected to return to action until October 16 when they will face Leicester City back in the Premier League.

Whether or not Solskjaer will heed Ferguson’s advice remains to be seen – however, with pressure mounting, one thing is for sure, whatever the Norweigan does, he must get it right.