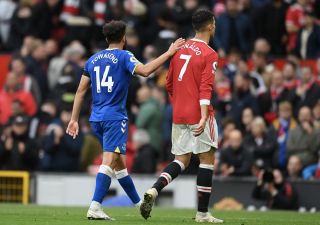 The Red Devils, despite playing at home in front of a packed Old Trafford, failed to secure all three points and were forced to settle for a 1-1 draw.

Manager Ole Gunnar Solskjaer named a much-changed side to the one who beat Villarreal 2-1 during last week’s Champions League group game.

The Norweigan opted to rotate five players, including Fred coming in, in place of Paul Pogba and Edinson Cavani starting ahead of Cristiano Ronaldo.

The hugely controversial decision to resign Ronaldo to the Red Devils’ bench has sparked criticism – including from legendary former manager Sir Alex Ferguson.

Despite Solskjaer opting to introduce Ronaldo with around 30-minutes left to play, the Portuguese megastar was unable to replicate his late goalscoring heroics against Villarreal and like his teammates, had to accept a disappointing draw.

Following the team’s poor result, the star attacker was then spotted leaving the Old Trafford pitch muttering under his breath and shaking his head – clearly frustrated.

However, while some have questioned the attacker’s reaction, former player Luke Chadwick, who spoke exclusively to CaughtOffside, has leapt to the five-time Ballon d’Or winner’s defence.

“I think it’s hard to hide emotions, hard to trap emotions,” Chadwick said. “I don’t think any of us know what the frustration was really about, it might’ve been at himself, or at the team, or the manager, no one really knows.

“Obviously the spotlight is on him but you can understand his frustration, it was a poor result and they nearly lost the game too, and he also probably didn’t have the impact he’d have wanted when he came on.”