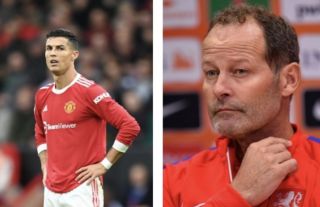 Cristiano Ronaldo is undeniably one of the best players in the world and after spending 12 years touring Europe, the Portuguese megastar is now back where he belongs – at Old Trafford. However, despite leading the line with his obvious talent and winning mentality on full display, the Red Devils’ form has slipped and the latest person to point the finger at Ronaldo is former Dutch defender Danny Blind.

Ronaldo, 36, re-signed for United late in this summer’s transfer window.

After appearing close, at one point, to joining rivals Manchester City, the Red Devils’ hierarchy swooped in to lure the Portugal international to Manchester for the second time in his career.

Having made a memorable second debut against Newcastle United, which saw him net a brace last month, the 36-year-old great has already scored five goals in six appearances, in all competitions.

However, despite Ronaldo’s red hot goalscoring form, questions are being asked regarding his impact on the team’s playing style.

With Ronaldo’s wing playing days well behind him, the 36-year-old is frequently expected to act as a poacher and hover in and around his opponent’s box, and that is a tactic that Blind thinks is proving detrimental to the rest of the team.

“Ronaldo doesn’t really need to play an active role,” Sportnieuws (via Sports Witness) report him saying. “Like: ‘take your time’. You also see the other players looking at you like, ‘how are we going to solve it then?’

“Normally, the striker runs from one central defender to the other. This caused a lot of miscommunication.

“Now, they are not playing in their familiar pattern. When the ball was deflected, you saw Paul Pogba coaching that they had to put all the pressure on.

“Ronaldo did not do that; he is not like that. He only thinks about goals and hopes others will conquer the ball.”