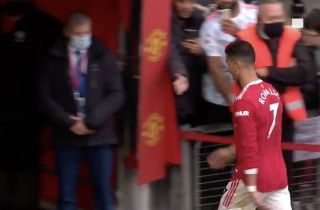 Having named a much-changed side, which included star striker Cristiano Ronaldo being dropped to the bench in favour of Edinson Cavani, Solskjaer will undoubtedly have a lot of questions to answer.

Read more: “What a touch” – some Man Utd fans are in awe of Bruno Fernandes’ assist vs. Everton

Following the draw, Ronaldo was spotted leaving the pitch immediately after the final whistle and head straight down Old Trafford’s tunnel.

😳 The frustration on the face of Cristiano Ronaldo. Not happy.

Straight down the tunnel at full-time. pic.twitter.com/IFNmqbbg8v