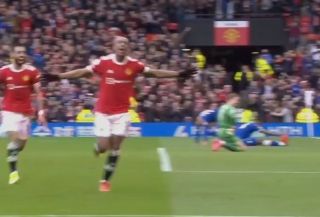 The build-up play was top class to give Anthony Martial the space needed to finish.

There might have been a slight deflection but Martial has been given his first goal of the season – also it’s his first goal in the league since February.

Many questioned the decision to start the Frenchman against Everton, but it has gone in manager Ole Gunnar Solskjaer’s favour with Martial scoring the game’s opening goal.

The touch from Bruno Fernandes, who assists the goal wonderfully, is second to none.

Finished with aplomb by Anthony Martial! 💥

The Frenchman enjoyed that one! pic.twitter.com/nDayZaHgcM

This should give Martial a boost in confidence. One he desperately needs!