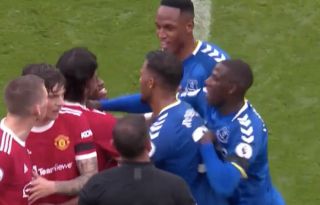 Manchester United’s early kick-off on Saturday afternoon against Everton saw both sides involved in a fierce exchange during the game’s first half.

Midfielder Scott McTominay tried to pick up full-back Lucas Digne after the Frenchman appeared to be injured on the floor, which sparked outrage among both sides.

Although the scenes that proceeded appeared to be blown out of proportion, upon closer inspection, it has become clear that Toffees’ midfielder Abdoulaye Doucoure threw more than one punch at United’s Fred.

Despite VAR taking a look at the events, the officiating system failed to detect any wrongdoing.