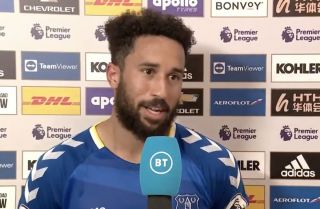 Everton attacker Andros Townsend, who spoke after his side’s Premier League 1-1 draw against Manchester United, has revealed how he idolised Cristiano Ronaldo during his earlier days in the sport.

Townsend was the Toffees’ hero after his second-half equaliser ensured the Merseyside club would not be leaving Old Trafford empty-handed.

Read more: (Video) Paul Pogba picks up Everton defender before slamming him to the ground

However, after beating David de Gea from close range, the English attacker then proceeded to run to the sidelines and imitate Ronaldo’s iconic ‘Siu!’ celebration.

Speaking after the game, when asked why he opted to replicate Ronaldo’s famous celebration, Townsend promised his showing was out of respect and revealed just how much he looked up to the United legend while growing up.

“He’s my idol. I grew up watching Ronaldo, I spent hours on the training pitch trying to execute his techniques.

“Maybe should have spent longer on the celebration because it wasn’t great!” 😂

Andros Townsend says it was a honour to share the field with CR7.