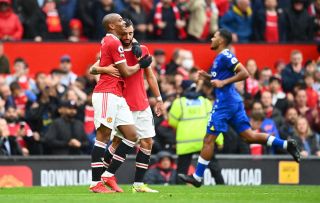 Manchester United are back in action in the Premier League, with Ole Gunnar Solskjaer naming a surprise starting eleven for the visit of Everton.

The Norwegian boss decided to rest Cristiano Ronaldo, who has scored five goals in as many games since he returned to the club. In his place, Edinson Cavani made his first start of the season.

Anthony Martial was another surprise inclusion in the team, having only started one game so far in the Premier League – a 1-1 draw against Southampton in August.

The 25-year-old could be on his way to proving his doubters wrong and he returned to the scoresheet, netting his first goal of the season after a sublime assist from Bruno Fernandes.

The Portuguese midfielder controlled the pass from Mason Greenwood with ease and layed it off to Martial, who made no mistake from close distance – an assist fans have praised on social media.

what a touch by Bruno

That Bruno's first touch was mad

Class touch and set from Bruno 👌

That touch from Bruno 🔥 #MUFC

What a touch from Bruno for that assist, quality. Buzzing for Martial. Get In.

It's less about the goal and more about that Bruno touch to be honest.

Read more: “Ole at it again” – some Man Utd fans are unhappy to see Ronaldo on the bench vs. Everton

United went into half-time with a goal to the good and will be hoping to build on that after the interval.