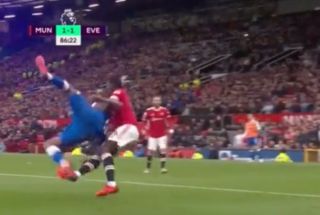 It wasn’t the result we wanted at Old Trafford — drawing 1-1 with Everton and missing the chance to spend a few hours at least at the top of the table.

Of course, Everton will be delighted with the point, but it sends us into the international break on a complete downer on top of recent results in all competitions.

Excluding Anthony Martial’s first-half opener, you would be hard pushed to think of any highlights from the game from a United perspective.

We are not passing the ball quick enough to break teams down when they come to Old Trafford with the low block.

It doesn’t surprise me that players are getting frustrated and Paul Pogba can be seen in the video below picking up Yerry Mina and slamming the defender to the ground.

The match was broadcasted live via BT Sport:

One Twitter user made reference to WWE star John Cena – and we can joke about it now because he got away with it.