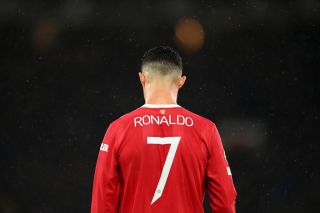 Following their dramatic win over Villarreal in the Champions League earlier this week, Manchester United are back in Premier League action as they welcome Everton to Old Trafford for the third time this calendar year.

Last season’s affair between the two sides at the Theatre of Dreams ended in a 3-3 draw, with a last-minute equaliser from Dominic Calvert-Lewin gifting the visitors a point.

Calvert-Lewin is one of a few notable absentees for the Toffees, with Ole Gunnar Solskjaer also deciding to shuffle his pack for the final game before the second international break of the season.

Cristiano Ronaldo scored the winner in the 95th minute against Villarreal on Wednesday and the forward, despite scoring five goals in as many games since he returned to United, has been left on the bench – something supporters reacted to on social media.

Ole at it again! Bench Ronaldo and start Martial… tha be what best coaches do 👍🏽

I’ve no problem with Cavani for Ronaldo, he deserves it.

But Martial has been dreadful, and he gets in over Sancho who needs game time.

Everton are weaker and we play McFred again.

Why is Ole resting Ronaldo when it's International break after this weekend.
🤣🤣🤣

Why isn't Ronaldo on the line up

Ronaldo on the bench has me 😭.

The decision to rest Ronaldo comes after two 90-minute outings against Aston Villa and Villarreal and with Edinson Cavani yet to start this season, it was always likely Ronaldo would sit out a game sooner rather than later.