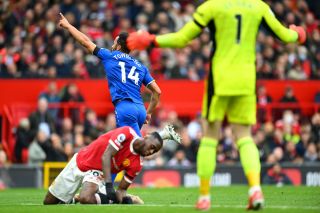 Another unconvincing display from the Reds as Everton leave Old Trafford with a point.

Manchester United failed to keep a clean sheet for the ninth consecutive home game – our worst record in fifty years.

OptaJoe provided the stat on Twitter following Andros Townsend’s equaliser, stating that this is United’s longest run of games without a clean sheet at home in the top-flight since February 1971 (10 games).

9 – Manchester United have conceded at least once in each of their last nine league matches at Old Trafford, their longest run of games without a clean sheet at home in the top-flight since February 1971 (10 games). Countered. pic.twitter.com/xjpQ1Sc0Hm

United were lucky not to have conceded more goals throughout the game with Demarai Gray providing a constant threat for the Toffees. Yerry Mina also had a goal disallowed for offside.

With Harry Maguire ruled out due to injury, Victor Lindelof started alongside Raphael Varane, while Aaron Wan-Bissaka and Luke Shaw performed in their typical full-back roles.

The manager must come up with a solution quickly to improve how this team reacted to being caught on the counter-attack because it looks too easy.

We are a shambles defensively.