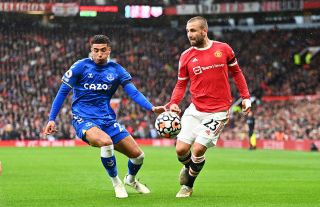 Manchester United welcomed Everton back to Old Trafford for their seventh game of the Premier League after returning to winning ways in the Champions League against Villarreal.

The hosts started the game on the front foot and distanced themselves from the ‘short passing’ notion as they came out of the blocks with intent against Rafa Benitez’s side.

Their early pressure didn’t result in a goal until later in the first half when Anthony Martial finished off a neat move, with Bruno Fernandes’ assist being the eyecatching moment. An equaliser in the second half ensured a point for the visitors, however.

Aaron Wan-Bissaka – 6
Frustrating in the final third, should’ve done better for their goal.

Victor Lindelof – 8
One of Manchester United’s best players on the day, handled Everton’s big target man with ease and offered excellent support for Wan-Bissaka against Gray.

Raphael Varane – 6
Not the busier of the two centre-backs but handled most things well. Poor with the ball at his feet when United were chasing a winner.

Luke Shaw – 5
The left-back is yet to rediscover the form he showed last season and at this summer’s European Championship. Rarely overlaps and is no longer one of United’s best creators.

Fred – 6
Very good up until his weak attempt at stopping Everton’s counter-attack.

Scott McTominay – 6
Made some good runs into the box and kept things ticking in the first half, faded after the interval.

Bruno Fernandes – 7
Great assist – you can just see his superior quality but unfortunately, his mentality isn’t replicated by other players.

Mason Greenwood – 7
Active on his right wing but needs to come inside more.

Anthony Martial – 7
Great moment for him to score for the first time this season.

Edinson Cavani – 6
Typical performance from the fan-favourite, he gave it his all.

Substitutes
Jadon Sancho – 9
The 21-year-old’s best performance since he signed and perhaps he should have started. United’s most potent attacker throughout the game, despite only coming on in the second half.

Cristiano Ronaldo – 6
Largely anonymous throughout but there’s not much you can do when nothing is working.