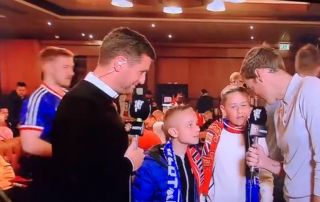 A moment MUTV will want to forget but social media won’t let that happen.

Working for MUTV can be a tough gig as Sam Homewood learned today.

Regardless of how badly things are going on the pitch, you can’t go all out Roy Keane and slate the players or manager in question.

Homewood is a good lad who has worked his way up the ladder as a presenter. He spent years at Full Time Devils before joining the club’s media team – and we have a lot of time for him and his work.

During a broadcast today after the draw with Everton, Homewood was joined by Alex Bruce and both were approached by two kids.

They gave extremely blunt responses when asked for their opinions on the game.

The first child says “Ole out,” while the second child agrees and adds “Sancho is crap”.

Homewood wasn’t happy about the whole situation and understandably so, as it made his work more difficult, but what was he expecting after today’s 1-1 draw at home to Everton when results of late have not been good enough?

MUTV previously stopped its phone-in shows because of a high volume of callers venting their anger towards the Glazers.