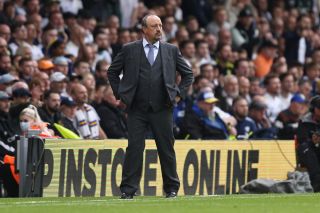 Manchester United will be looking to move to the top of the Premier League table when they take on Everton at Old Trafford on Saturday afternoon.

The Reds go into the game on the back of a late 2-1 victory over Villarreal in the UEFA Champions League midweek, whilst the visitors ran out 2-0 winners over Norwich City in the Premier League last weekend.

Ole Gunnar Solskjaer will still be without duo Marcus Rashford and Harry Maguire for the clash against the Toffees, however, Luke Shaw could return to the starting eleven after missing the match against Villarreal during the week.

Everton have made an impressive start to the season under newly appointed Rafa Benitez and currently sit just below United in fifth place and with Demari Gray, Andros Townsend and co all in fine form Saturday’s game will arguably represent the Reds toughest test of the new season so far.

Games against Everton have never been easy in the past and I expect Saturdays will be no different.

Everton look the real deal under Benitez and United will have to be at their very best should they wish to take all three points but with Ronaldo on fire and with Fernandes, Pogba and co all likely to start United will still fancy their chances to defeat the toffees.

It’s a game that likely to have a lot of goals and one which certainly won’t be easy but I still expect United to beat Everton. The midweek victory over Villarreal came at the perfect time for United after the recent set backs and by beating Everton on Saturday it will be the perfect way for United to head into the international break on a high.