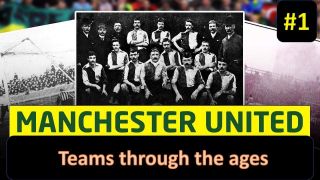 So it begins, this is the first entry in my blog series for United Teams Through The Ages. With so little information around from the very early years, the first update covers 1878-1893. Following this, materials and sources are a little easier to come by and an update per season will be covered.

I plan to release one of these articles every 2-3 weeks and it’s a project I started some time ago, but due to time and other reasons I never really got into my stride. All these articles will be released on Stretty News (you lucky lot). I’ll make them fairly factual and byte sized for easy reading and I’m sure everyone will be able to learn or pick up the odd nugget of information. I’ll also research and post any historical artefacts and memorabilia from around the period covered.

So… shall we begin…

Manchester United football club was formed in Newton Heath, a district in the city of Manchester, by workers of a local railway yard in 1878. At the time, the club was just a way for the workers to participate in their favourite sport and matches were arranged against workers from other departments or companies. What was to become the greatest football club in the world was known as Newton Heath Lancashire and Yorkshire Railway (Newton Heath LYR) and they played their matches at the North Road Ground. The North Road Ground was said to be a ‘muddy bog’ and players had to change in a local pub just up the road before and after matches.

It wasn’t until the 1886/1887 season that the team had their first competitive match; a 2-2 draw against Fleetwood Rangers in the first round of the FA Cup in front of a crowd of 2000. Newton Heath insisted the match should have been replayed but the officials decided extra time should decide the winner. Newton Heath refused and the match was awarded to Fleetwood Rangers.

In 1888, the Football League was formed but several applications later; the team had still not been accepted.

The 1891/1892 season saw Newton Heath progress to the fourth qualifying round of the FA Cup where they were beaten by Blackpool 4–3. On route to the fourth round, Newton Heath LYR had dished out a  5-1 drubbing of local rivals Manchester City and the following season were accepted into the Football League.

On 3rd September 1892, in front of 8,000 fans, Newton Heath made their league debut away to Blackburn. Blackburn won the match 4-3. Newton Heath lost four of their opening six games of the season, including a heavy 6-0 defeat at the hands of Everton and the remaining two matches were draws. On 15th October 1892, Wolves made the trip to the North Round Ground and Newton Heath served up their first win of the season in a spectacular 10-1 victory. The season continued with a number of heavy defeats, and Newton Heath ended the campaign rock bottom with only 6 wins (all at home) out of 30. In the 30 matches, Newton Heath conceded a whopping 85 goals and scored 50.

This is the first known picture of the Newton Heath team. They were eventually to play in green and gold… see the connection to today? Initially the ground consisted only of the pitch, around which an estimated 12,000 spectators could congregate. The addition of stands in 1891 increased the capacity to about 15,000. The football club signed its first professional players in 1886 and began to break from its sponsoring railway company, but without the company’s financial support it was unable to afford the rent on the ground and was evicted.

Following the foundation of Newton Heath LYR F.C., at the request of the employees of the Lancashire and Yorkshire Railway (LYR) company’s Carriage and Wagon Works, the club needed a pitch to play on. The chosen site was owned by the Manchester Cathedral authorities, but although conveniently sited next to the wagon works it was a “bumpy, stony patch in summer, [and] a muddy, heavy swamp in the rainy months”. The railway company agreed to pay a nominal rent to the authorities and to lease the ground to the football club. As it was next to the railway line operated by the LYR, the ground was often clouded in a thick mist of steam from passing trains. Players had to get changed in The Three Crowns public house, a few hundred yards away on Oldham Road, as there were no facilities nearby. The Three Crowns (circa 1970) Used as an unofficial headquarters and changing facilities for Newton Heath L&YR FC in the late 1800s.
​

There may have been some kind of refreshment offered to supporters at the eastern end of the site (this is unconfirmed).

The first recorded matches at the ground took place in 1880, two years after the club’s formation, most of them friendlies. The first competitive match held at North Road was a Lancashire Cup first round match against Blackburn Olympic’s reserve team, played on 27 October 1883, which Newton Heath lost 7–2. Details of the attendance have been lost, but it is assumed that the ground must have been enclosed by then, as an entry fee of 3d (about £1 as of 2012) was charged for the match. Football became a professional sport in England in 1885, and Newton Heath signed their first professional players in the summer of 1886. The club’s income was insufficient to cover its wage bill, and so the 3d admission charge was extended to all matches played at North Road, later rising to 6d.

This is the original programme for the Manchester Senior Cup Final played at Ardwick’s Hyde Road Grounds versus Bolton Wanderers. Ardwick later became known as Manchester City. This original programme has the date written in as 1890, but it was 1892 when this game was played[on the same date]
​

The ground originally had a capacity of about 12,000, but club officials decided that was not enough to give them any hope of joining the Football League. Some expansion took place in 1887, but in 1891 Newton Heath used what little financial reserves they had to purchase two grandstands, each able to hold 1,000 spectators. However, this transaction put the club at odds with the railway company, who refused to contribute any finance to the deal. The two organisations began to drift apart from then onwards, and in 1892 the club attempted to raise £2,000 in share capital to pay off the debts incurred by the expansion of the ground. The split also led the railway company to stop paying the rent due on the ground to the Manchester Cathedral authorities, who at about the same time decided to increase the rent. Under increasing financial pressure, especially as the Manchester Deans and Canons felt it inappropriate for the club to charge admission to the ground, an eviction notice was served on the club in June 1893. The club’s management had been searching for a new stadium since the first eviction attempt in May the previous year, and they were able to move to a new ground on Bank Street, three miles away in Clayton. It proved impossible though to take the two grandstands to the new ground, and they were sold for £100.

The stadium no longer exists, and North Road has been renamed Northampton Road. After a spell serving as playing fields for locals, Moston Brook High School was opened on the site. A red plaque was attached to one of the school’s walls, marking the location of the old stadium, but it was stolen and not replaced. Following the school’s closure in August 2000, the site was chosen by the Northwest Regional Development Agency (NWDA) as the location of the North Manchester Business Park in 2002