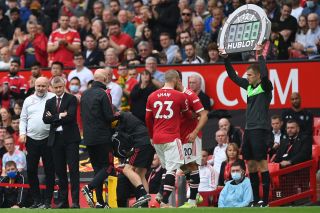 Luke Shaw has been included in the latest England squad, despite missing Manchester United’s 2-1 win over Villarreal during the week and there’s a likelihood that the left-back will miss this weekend’s league clash against Everton.

Although England manager Gareth Southgate has hinted that Shaw might be available for United’s match against Everton on Saturday, Manchester Evening News reporter Samuel Luckhurst claims the player is still unwell and could be ruled out again.

Wrote at start of the week Shaw was unwell during Villa. Understand he could miss Everton tomorrow, too https://t.co/Y99ZDZXntr

Southgate spoke about Shaw and his condition after releasing details of an England squad that sees United captain Harry Maguire ruled out through injury.

“Clearly there are still to appear for their clubs, so there’s an element of the unknown with that, but our understanding is that Mason [Mount] and Reece [James] have a good chance going into the weekend,” Southgate said, as quoted by the MEN.

“We will have to track that. I think Luke’s was more of an illness than anything else. That was our understanding. We don’t play until next Saturday, our first game, so there’s a bit of time and we will know more as this week progresses on all of those situations.”

Prior to United’s victory of Villarreal in the Champions League group stages, Ole Gunnar Solskjaer said: “Luke has been in today, so I’ll give him a chance to be involved, he didn’t train with the team. So maybe the best-case scenario is he will join us on the bench.”

Shaw didn’t make the bench but Alex Telles stood in his place and scored the all important equaliser from a cracking volley at the edge of the box.