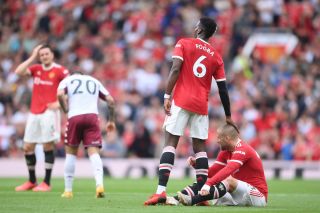 The Reds return to Premier League action on Saturday as Everton travel to Old Trafford for the early kick off.

Everton have claimed as many points (13) as Manchester United this season and trail top-of-the-league Liverpool who have 14 points under their belt.

While Everton have had a week’s rest since their 2-0 victory over Norwich City, United go into this match off the back of a difficult Wednesday night fixture in the Champions League, beating Villarreal 2-1 with a last-minute winner.

First-choice right-back Aaron Wan-Bissaka returns to the side after missing the win against Villarreal due to suspension, and Ole Gunnar Solskjaer didn’t sound too confident about Luke Shaw’s availability when asked by reporters.

“No, Luke feels better but he has still got the shoulder injury,” Solskjaer said, as quoted by the Manchester Evening News.

He added that Marcus Rashford has returned to training, as well as an update of sorts on Harry Maguire and Amad: “Marcus trained for [the] first time fully today. Harry, Amad still out. We didn’t lose anyone on Wednesday.”

It will be a huge boost for this side when Rashford returns to the left. Where that leaves Paul Pogba in the line-up remains to be season, possibly to a deeper role in midfielder, but I am looking forward to seeing him attack with Jadon Sancho on the opposite flank.