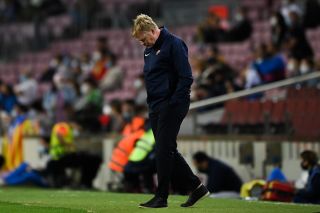 Thierry Henry claims Barcelona are the ‘same as Liverpool and Manchester United’ amid the chaos at the Nou Camp.

Barcelona manager Ronald Koeman is under increasing pressure after a disappointing run of form that has seen his team win just one of their last five games.

The inevitable axe has started to fall on the Dutchman with Barca rounding off their worst ever start to a Champions League campaign after suffering a 3-0 defeat against Benfica on Wednesday night. It’s the first time Barcelona have lost their first two games in the competition — losing to Bayern Munich in their opening match.

Former Barca striker Henry has expressed his views on the La Liga giants, even comparing them to Liverpool and Manchester United.

“It carries on from last year and everything that has been happening at the club,” Henry told CBS Sport, as quoted by HITC. “The fans have been patient enough to understand what is happening. We all saw it, Messi leaving the club, for the reason that we know.

“We are talking about a giant of Europe. Same as Liverpool and Manchester United. When you play for Barcelona, it’s special. When you win, it’s like you are on top of the world. But when you lose then you don’t want to be in that dressing room, I am telling you.

“What do you do? Even when you win there is a problem. Just imagine if you lose, it’s going to be a tough one for those guys going back to Spain (after defeat to Benfica).”

Koeman is on the brink but he could still take charge for Barcelona’s league fixture versus Atletico Madrid at the weekend, which is the last game before the international break, giving the club’s board time to replace him.

Ultimately, Barcelona are a shadow of the team that lifted the European Cup in 2011.

Henry has a valid point because everything that happens at United is magnified more than elsewhere.