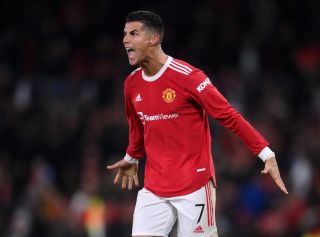 When teams set up with a low block against Manchester United it’s important that we pass the ball quickly and to the right players in space.

That has led to Ole Gunnar Solskjaer urging his players to move to ball quicker in the final third — and also to get the most out of Cristiano Ronaldo, according to ESPN.

Ronaldo has scored five goals in as many games since returning to Manchester United and he’s made it clear to Solskjaer and his coaches that he can score more goals if United improve and speed up attacks when in possession.

The Portuguese superstar has been deployed in a central attacking position by Solskjaer, with Jadon Sancho and Mason Greenwood used as inverted wingers.

The speed can come from those two players if the midfielders sitting deeper can get the ball out wide fast enough with precision.

Sources have told ESPN that they want the team’s defensive players to get the ball to the attackers quicker, not just Bruno Fernandes, who are already positioned further forward. New signing Raphael Varane should help in that department.