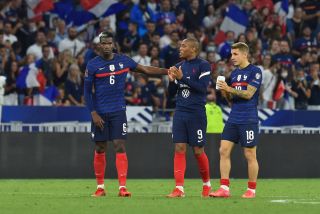 Manchester United trio Raphael Varane, Paul Pogba, and Anthony Martial have been called up by France manager Didier Deschamps for next month’s set of international games.

Raphael Varane joined the club from Real Madrid just under two months ago and has enjoyed a solid start to life in Manchester, instantly cementing himself as a permanent fixture in Ole Gunnar Solskjaer’s backline.

Paul Pogba has enjoyed a brilliant start to the new campaign after impressing in this summer’s European Championship. The 28-year-old became the first Manchester United player to assist four goals in one game earlier this season. Furthermore, he has been credited with seven assists in six league games, more than any other Premier League player.

Anthony Martial’s calendar year has been less eventful, with the forward losing his place in Solskjaer’s side and is often seen on the bench. Despite rarely starting for United, the 25-year-old is often called up by Deschamps.

France face Belgium next month in Nations League and all three players will be hoping to make an impact for their nation as they chase their first trophy since the 2018 World Cup.