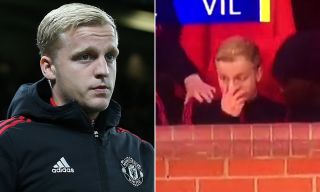 According to reports, Donny van de Beek will seek assurances from manager Ole Gunnar Solskjaer over his continued lack of minutes on the pitch since signing for Manchester United over a year ago.

The Telegraph claims Van de Beek is ready to meet with Solskjaer to get to the bottom of his problem.

The £35m midfielder started just four games in the league last term and has managed a total of 141 minutes across all positions this season. It really is no wonder why Louis van Gaal doesn’t pick him to play for his country — something he did regularly while at Ajax.

His latest snub grabbed the headlines on Wednesday night as he was seen on the bench, fuming after watching Fred come on instead of him.

Say what you like about the Brazilian, but it was his cross that sent the ball into the box for United’s stoppage-time winner.

Van de beek is still under contract at United until 2025 and has an option for a 12-month extension on top of that.

Let us know in the comments section what United should do with Van de Beek?