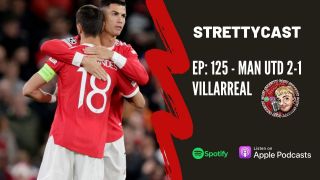 Dale O’Donnell is joined by Shaun Connolly to look back on Manchester United’s 2-1 win over Villarreal in the UEFA Champions League.

The repeat of last season’s Europa League final, which the Spanish side won on penalties, looked to be heading for a draw until Cristiano Ronaldo’s last-minute winner.

United didn’t perform well and more questions are asked of the football we are seeing under Solskjaer, though the result on the night shouldn’t be underestimated as Villarreal have long proved to be a tricky opponent.

Diogo Dalot had a night to form but could more have been done, at least tactically, to support the under pressure Portuguese full-back?

David de Gea had his best performance in years and the manager thought he was the best goalkeeper in the world (again) on Wednesday night.

The next episode will be recorded after United take on Everton at the weekend.