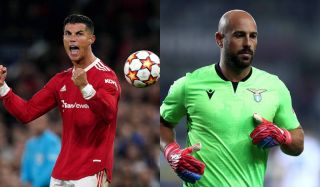 Cristiano Ronaldo’s late winner against Villarreal is at the forefront of coverage on Thursday morning as the dust settles on Manchester United’s first Champions League win of the season.

The surprising defeat to Young Boys two weeks ago put Ole Gunnar Solskjaer’s side in a tricky position going into the rest of the group, with last season’s heartbreak still fresh in the memory.

Villarreal made a valiant effort in their trip to Old Trafford and took the lead in the second half. It wasn’t long, however, before United equalised through a magnificent volley from Alex Telles.

It looked like the two sides were going to share the spoils but a 95th-minute winner from Ronaldo sealed all three points for the Reds in dramatic fashion.

Liverpool legend Pepe Reina was unhappy to see his former team on the losing side and took his frustrations to Twitter with a series of tweets, insisting Ronaldo’s goal should have been disallowed for offside.

“Offside all day long,” he said before following up with an angry emoji. The former Spain international claims Jesse Lingard was interfering with play after laying the ball off to Ronaldo.

Manchester United fans will lose little sleep over what Reina thinks of a 95th-minute winner at Old Trafford – perhaps it makes it even better.