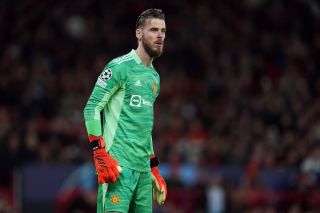 Cristiano Ronaldo’s late winner against Villarreal will steal all of the headlines but David de Gea, one of Manchester United’s best performers this season, was integral to Ole Gunnar Solskjaer’s side.

The 30-year-old goalkeeper’s struggle in recent years was epitomised against the same opposition just four months ago when he was at the forefront of criticism following the Europa League final defeat in May.

And of course, it would be against Villarreal that he pulls out a throwback performance to remind Manchester United supporters why he was the best goalkeeper in the world for so long.

When Man Utd needed him to keep them in the game vs. Villarreal, David De Gea stepped up 💪#UCL pic.twitter.com/I6vzZDHfxJ

Read more: (Video) Cavani pulls out lung-busting run to rescue a pass Ronaldo had given up on

De Gea made a total of six saves against Unai Emery’s side and looked unbeatable under the floodlights at Old Trafford, just as his side needed him the most.

His heroics have been acknowledged by broadcasters BT Sport, who have put together a montage of all of his saves in the crucial victory over their Group F rivals, as seen above.